Before I left the States, my neighbors arranged to meet me for six days in Northern Thailand.

I really wasn’t expecting to have so much vacation this fall. Sometimes things just work out that way. The trips to Kuala Lumpur and Siem Reap were spur of the moment to support my friend. I planned this trip back in May.

My neighborhood back in Austin is a wonderful place to live. Many of the people who built the houses in the 50’s and early 60’s still live there but as they move out, young families move in. Large trees shade the houses and streets.

Drew and Jennifer live across the street from me. When my kids were small, my neighbors let them cut through their yards to play in the creek behind their house. Every now and then, Drew and Jennifer reported back to me about my kids’ antics in the creek. They really gave my kids a “free-roaming” childhood with unseen adult supervision.

Drew and Jennifer started coming to Thailand a few years ago. They mainly stay at the Fern Resort in Mae Hong Son. Bradjolina stayed there when they were together so it’s a nice place. They invited me to join them on this year’s trip to Chiang Rai.

We encountered some great unexpected surprises so this drive took us 8 hours. We stopped to investigate this enormous peaceful, meditating monk statue about 30 minutes after heading out of Chiang Mai. I have no idea who he is and Google images offered no clues but clearly Thais revere him. 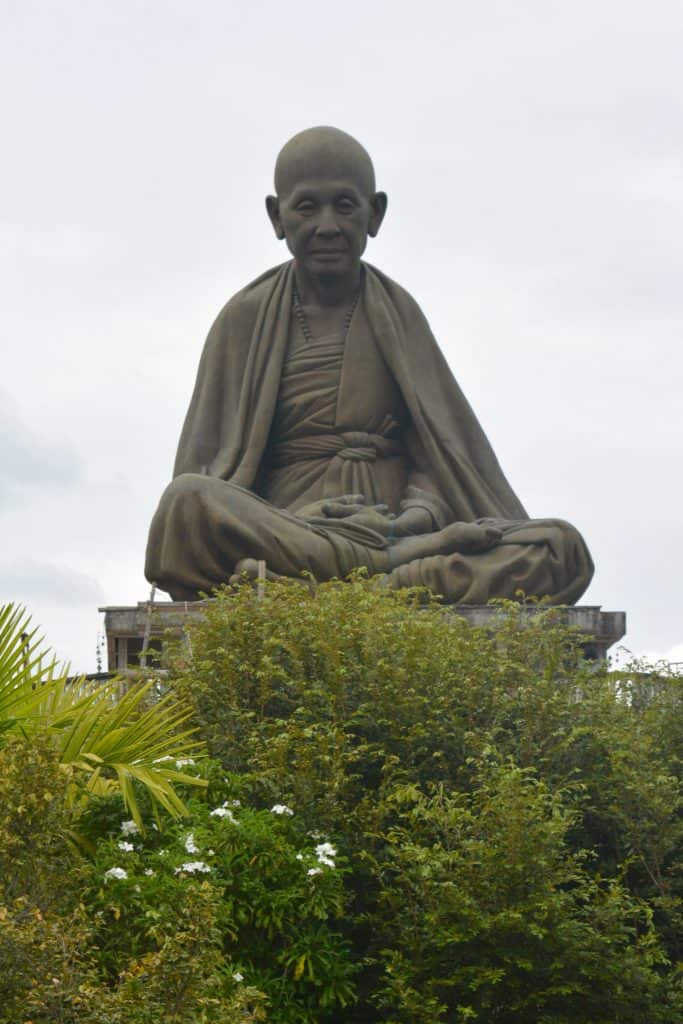 We then stopped at Chiang Rai Hot Springs about an hour north of Chiang Mai. Souvenir and food shops surround the hot springs that sit in the middle of the parking lot. Beware of hot spray if you stand next to the hot springs for a photo. If you get sprayed, you’ll smell like rotten eggs and may also get burned. At the back, they have nice bathrooms complete with toilet paper and soap for 5 baht. I found a few gifts there

As we drove north from the hot springs, we saw this beautiful wat sitting on a hill.

The turn off for Wat Phrachao Luang is 81 kilometers north of Chiang Mai (90 minutes if you’re not stopping). The name of the town is Mae Chedi (we thing)

Lots of little wats and shrines line the 2.5 kilometer drive to Wat Phrachao Luang. The white Buddha below is one of the side “shrines”.

Right next to the turn off is the best Khao Soi you’ll ever have. This little hole in the wall restaurant has been serving Khao Soi to locals for 50 years. At 50 baht per person, you really can’t beat it.

I spotted an amazing teak house just north of Mae Chedi on the west side of the road. When you get up close, you see that the entire place is intricately carved. There’s a large ceramics place right next to the house that is interesting as well.

We saw lots of signs for coffee between the teak house and Chiang Rai. We didn’t try this PP coffee even though it promised an “aroma” but we did stop at White coffee (on the east side of the highway) and Doi Chaang coffee (on the west side of the highway). Drew and Jennifer bought some ground Doi Chaang medium roast coffee and a french press. They said it was quite good. I bought some espresso beans that I’ll coat with chocolate and give as Christmas gifts. 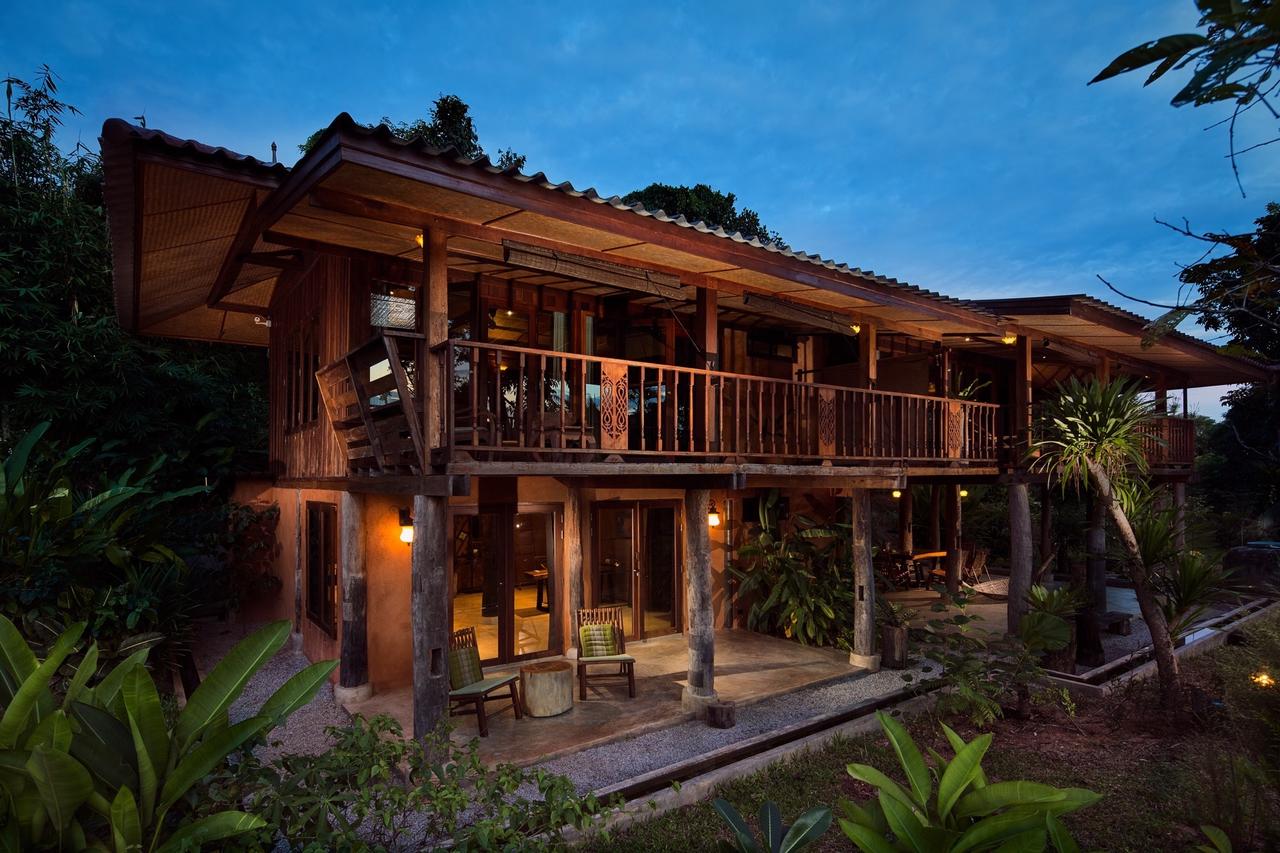 The main house at Bambuh Boutique Homestay has a covered terrace with a large table. We met some amazing people in the evenings and at breakfast. On our first evening there, we met a German couple, Martin and Anke.

At breakfast we learned that Martin left his computer charger at home so he and Anke needed to go to the mall to buy a new one. Since we overslept a little, Drew offered to take them to the mall and then the White Temple. Sadly the computer store in the Chiang Rai mall didn’t have Martin’s charger in stock but we did get to see phone company employees do a dance. We also grabbed lunch before heading out to the White Temple.

We spent a few hours wondering around the White Temple and stopped for a caffeine break at a shop across the street.

Then we headed out to what we thought was a tea plantation. Siri opted to send us on the most scenic route. We drove east on 1208 (the road that runs beside the White temple) and then somehow ended up on this lonely dirt road.

Siri promised that the tea plantation lay at the end of the road and we trusted her until the road got too rough. We found rows of tea bushes and some stunning scenery but no welcome center.

We stumbled upon Singha park on the way back into town. It’s on route 1211 if you want to go to the information center.

We drove up Route 1 to Mai Sae which is a border town with Myanmar – nothing to see there really unless you want to go shopping. We did stop by the Monkey Temple on the way. Then we drove down route 1290 to the Golden Triangle. The Hall of Opium is an interesting and well-done museum just north of the Golden Triangle. As you might expect, the Golden Triangle is quite the tourist trap – very similar to the Four Corners in the US. Loads of souvenir stalls line the streets and sidewalks. A boat-shaped Wat offers views of Myanmar and Laos and hawkers sell tickets on boats for short shopping trips to a mall in Laos. We took a 40 minute boat tour on the Mekong sans shopping and ate dinner at Homemade Steaks and Brew.

We got up early to drive west into the mountains so we could see Akhe tribes people in the markets. Akhe women wear elaborate headdresses and colorfully embroidered clothes. They often sell their crafts in the markets of Doi Mae Salong, a Chinese settlement high in the Thai mountains.

Drew came down with an awful cold that got progressively worse so we convinced him to see a doctor. Thais typically go to the emergency room to see doctors during off hours so that’s where we went. Sririburn Hospital is a private hospital. A golf car picked us up in the parking lot and dropped as at the door. Drew checked in at the information desk and was sent over to the “cash” reception area. A nurse there took his vitals and led him back to the doctor. A concierge walked him to the pharmacy and to the cashier where he paid less than $50 for everything. Since Drew needed to take his medications with food, the concierge walked us over to a noodle shop next to the hospital to buy some lunch.

We drove out to Chiang Saen which is a peaceful town with old city walls and temples on the Mekong. We walked around one of the old temples and saw a little of the old city wall before dark and then had a nice dinner at Famai Restaurant. Their tamarind shrimp is really amazing.

Since this was our last full day in Northern Thailand, we wanted to see more of the local people. Our host told us that Chiang Kong markets attract a variety of hill tribe people. Chiang Kong is South of Chiang Saen on the Mekong River. We passed some beautiful scenery on the way. One of our stops was in a little town with a Wat (of course) and a coffee shop. The monks at the Wat tried to talk to us even though we didn’t speak Thai and they didn’t speak English.

The drive was pretty but Chiang Kong was a bust. Evidently, they only have market days on Friday and Saturday and we were there on Monday. We drove along the river and then had lunch at a Thai Mexican place. Normally, I steer far, far away from Mexican food outside the Southwestern US or Mexico but this place was pretty good. Since there wasn’t much to see or do in Chiang Kong, we headed back to Chiang Saen.

The road is under construction so you have to drive for a few miles in the mountains on dirt roads. If you stop to take photos, be very careful where you park. We pulled over to get a photo and parked a good distance away from  where a backhoe was loading dump trucks. Jennifer stayed in the car while Drew and I took photos. As we walked back, an empty dump truck came barreling down the mountain, spun around almost 180 degrees right in front of our car and then backed into the place where the backhoe was. Fortunately Jennifer didn’t see any of that. Drew and I speculated that either the driver miscalculated his speed or that’s the way he turns around to get his load.